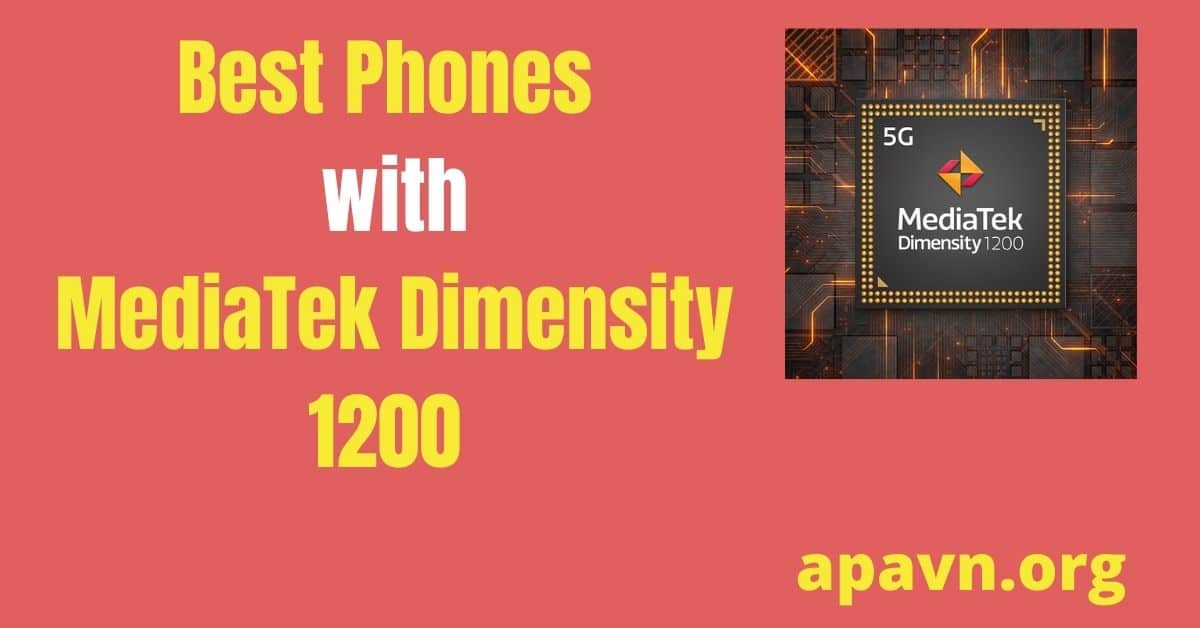 Hello there, these days, smartphone performance is extremely important to every user; as a result, people seek for distinctive and powerful phones, but with so many options, they are unsure which one to choose.

In this post, we’ll look at some of the top MediaTek dimensity 1200 processor phones that can handle hard gaming and multitasking. All of these phones will improve the quality of your smartphone experience.

The Dimensity 1200, MediaTek’s flagship processor for 2021, will compete with Qualcomm’s Snapdragon 870/888 and Samsung’s Exynos 2100/1080. Several phones with Dimensity 1000/1000+ processors have already been sighted. Xiaomi, Realme, OnePlus, Oppo, and other smartphone makers have now added Dimensity 1200 powered 5G handsets to their portfolios.

The Dimensity 1200 is an octa-core CPU using a 6nm manufacturing process. It has a single Arm Cortex-A78 ultra-core processor with a frequency of up to 3GHz for high performance and three Arm Cortex-A78 Super cores (up to 2.6GHz). The remaining four cores are Arm Cortex-A55 for efficiency (clocked at 2GHz). It boasts a Mali-G77 GPU with HyperEngine 3.0 gaming technology and nine cores. The new SoC will have a 22 percent quicker CPU and a 25% higher power efficiency than the previous one.

With the company’s UltraSave technology, the Dimensity 1200 has an integrated 5G modem. Sub-6GHz, dual 5G SIM, 2CC carrier aggregation, and dynamic spectrum sharing are all supported (DSS). A five-core HDR-ISP on the SoC can shoot 200MP images and 4K HDR video. AI Multi-Person Bokeh, AI-Panorama Night Shot, AI noise reduction, and other AI camera functions are available. It has a display refresh rate of 168Hz, which is extremely fast.

The Realme GT Neo 2T is one of the top 1080p phones with 5G capability. This phone features a glass back and front and weighs roughly 186 grammes.

This gadget boasts a super AMOLED display with a 6.43-inch larger screen for watching movies and playing games. The refresh rate on the Realme smartphone is 120Hz.

This phone is powered by the newest Android 11 operating system and features a 1200 processor for lag-free gaming. It sports a 16-megapixel front camera and a 64-megapixel triple back camera.

This phone supports reverse charging, comes with a 65-watt charger, and has a larger 4500 mah battery that can last all day. The Realme gt neo 2T also sports dual speakers to improve audio quality.

The Vivo X70 Pro is one of the greatest dimensity 1200 phones. This phone is protected by Gorilla Glass 5 and runs Android 11.

The Vivo X70 Pro features a quad-camera configuration with a 50-megapixel primary camera and a 32-megapixel front camera.

This phone includes a lithium polymer 4450 mAh battery that enables 44-watt rapid charging and can charge from 0 to 100% in about 55 minutes, with a power delivery of 3.0. The Vivo X70 Pro is one of the top phones with a MediaTek dimensity 1200 processor.

The Realme GT Neo Flash is one of the greatest flagship dimensity 1200 phones, and it is the top phone on the list. This phone features a 6.3-inch super AMOLED display with 120 Hz refresh rate.

This phone includes a triple back camera configuration with a 64 MP main camera, an 8 MP wide-angle camera, and a 2MP macro camera. It can also record 4K films and has a 16 MP front camera.

It has a 4500 mAh battery and quick charging capabilities. This phone can be charged from 0 to 100% in 35 minutes with the 65-watt fast charger. With a resolution of 1200 pixels, it is the greatest smartphone.

This phone has a 6.55-inch AMOLED display with a resolution of 1080×2400 pixels and a pixel density of pixel density. It has Corning Gorilla Glass 5 protection and an oleophobic coating, as well as a 90 Hz refresh rate.

This phone has a 4500mAh Lithium polymer battery and supports the very awesome version 2 65-watt charger. It takes 35 minutes to charge this phone from zero to 100 percent.

This phone features 256 GB of internal capacity and 12 GB of RAM. Overall, the Oppo Reno 6 Pro is one of India’s top MediaTek density 1200 processor smartphones.

This phone features an AMOLED display with a 6.67-inch screen and a pixel density of 395 PPI. It also has Corning Gorilla Glass 5 protection and a 120 Hz refresh rate, as well as a multi-touch HDR10 plus display.

This phone has a 5065mAh battery and supports the Sonic version 3.0 67 watts rapid charger, which can charge the phone from 0 to 100% in just 42 minutes. Overall, this phone with a 12000 CPU is ideal for gamers. Also on this list, the Poco F3 GT has the best battery backup.

So MediaTek Dimensity 1200 processors are the greatest and most powerful smartphones. All of these phones are available in India for less than $50,000, making them a good investment if you want outstanding performance.

Because of its power-efficient processor and unrivalled performance, Mediatek Dimensity 1200 phones are in high demand, especially in 2021, and will also reign in 2022.